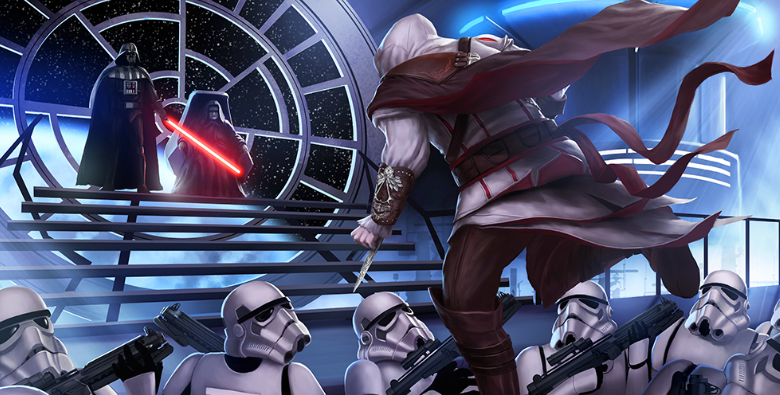 Will Ubisoft Introduce Star Wars To The Assassin's Creed Universe?

A few days ago, Lucasfilm confirmed that they have acquired a new partnership with Ubisoft, who will begin working on a new open-world Star Wars game. This means that EA no longer have exclusive rights to the series’ gaming sector but that doesn’t mean EA will stop making Star Wars games.

Although, with Ubisoft acquiring the rights to make a Star Wars game, it opens the door to the possibility of crossing universes with its own established franchises. Yes, I’m talking about Assassin’s Creed, Prince of Persia and Far Cry for example.

In the past, Ubisoft has frequently advertised other games within their own titles. A good example of this was the advertising of Far Cry in Assassin’s Creed: Black Flag and it wasn’t the only time they did this. In fact, Ubisoft have carefully placed these Easter eggs in many of their games over the years.

If Ubisoft were to do this, it would mean that in way, Ezio and Darth Vader are in some way in a kind of universe together. Now, I’m not going to even start with comparing what the two would do to each other if they were to face off, as Vader would clearly win this confrontation by a landslide.

Still though, it would be interesting to see if Ubisoft dares to intertwine the two universes in some way or if they dare to do it with another of their various games.