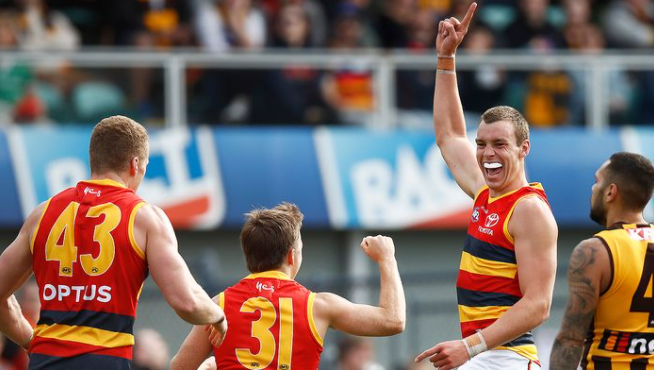 SuperCoach: Is Riley Thilthorpe Too Expensive To Pick up?

We are approaching yet another round where SuperCoach players are pondering about which trades and moves to make. One of the moves that many SuperCoach players might be considering is recruiting Riley Thilthorpe, the Adelaide youngster who was taken with their 2nd overall pick, in the 2020 AFL National Draft.

Talent obviously isn’t the question and we got to see that first hand when Thilthorpse made his debut in round 6, where he scored an impressive 91 points. However, Thilthorpe’s second game was less impressive with a 55 point return and this is where some might be wary. We have already seen the longevity of several youngsters this season be rather ordinary. And with numerous injuries to premium players thus far in 2021 as well, some coaches may start to wonder if holding a trade is better than continuing to spend them.

Thilthorpe’s position in the side isn’t secure and being a young key-position player, potentially increases his risk. Starting at $202,800, he shouldn’t be breaking the bank but for a kid that’s only played two games, that’s a big price compared to majority of rookies. Remember, Matt Flynn is only $273,000 after 4 games and a $140,000 price-jump this year. That’s only a $70,200 difference in price for a player that’s at least proven his consistency (when he does actually play). To make this move, you will need to be confident that Thilthorpe will not only perform well but also remain in the side. Otherwise, you’re stuck in another Matt Flynn situation. Also, make sure that Thilthorpe is selected and is playing his third game, or suffer like so many Tom Highmore holders.