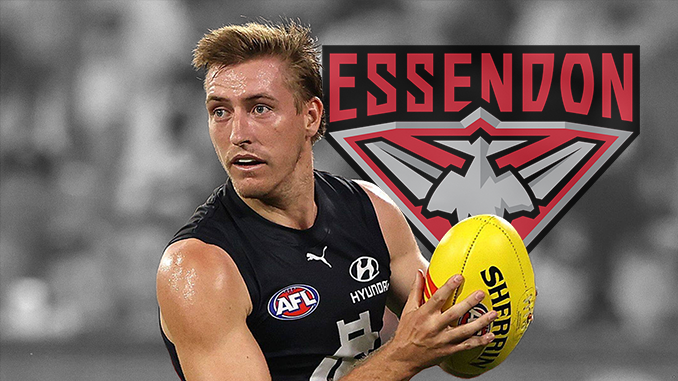 A POD (Point Of Difference) in your side, is a player that has low ownership. These players can make a big difference in the early days of owning them before everyone else jumps on the bandwagon. However, that only applies if they perform well. These players have low ownership because they’re risky, but with great risk sometimes results in great rewards.

Will Setterfield, the newly recruited Essendon MID, can be one of those players many will avoid because of the risk, but that can pay off big time for coaches that take that risk. The 24-year-old has made his way to Essendon from Carlton during the AFL’s free agency and trade period. Setterfield has been mentioned in a few SuperCoach circles but most have disregarded him due to Esseondon’s stacked midfield, which is the club’s strong point.

However, unlike the other Essendon midfielders, Setterfield is a big-bodied player who thrives on contestant football. This is something that Essendon has urgently needed in the past and it’s why Setterfield could be someone to keep an eye on. Setterfield’s average of 63.3 at Carlton in 2022 isn’t impressive. However, when given the opportunity to play in the position he thrives in, Setterfield scored 92 against GWS, 98 against Melbourne and 87 against Collingwood.

2020 was Setterfield’s best season. He played 16 AFL games and averaged 89.7 points. This included 6 scores above 100 and one of those being a massive 141 against Gold Coast. As you can see, the potential is there. Also, if he can reach the heights of 2020 or perform even better while priced at only $348,200, you would have picked up a genuine POD.

Although, this is still preseason. He needs to be fit and playing well during the preseason games to consider him. Keep an eye on his output and how Essendon uses him before making a decision, but Setterfield is someone who you should be keeping an eye on.