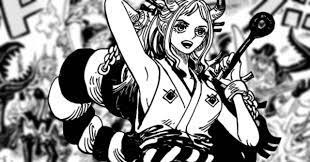 While the battle takes place we will see flashbacks from the events that took place in Wano 20 years ago, as well as some of Yamato’s childhood. This flashback will include Yamato being locked away with a powerful warrior from the past. Shimotsuki Ushimaru, the descendant of Rymua and the predicted father of Zoro, is trapped with her in a cell.

We should expect to see more information about the Shimotsuki family, as the previous manga chapter hinted. The manga chapter will end with Kaido and Yamato attacking eachother with a final Haki attack each. We assume their fight will now come to an end.