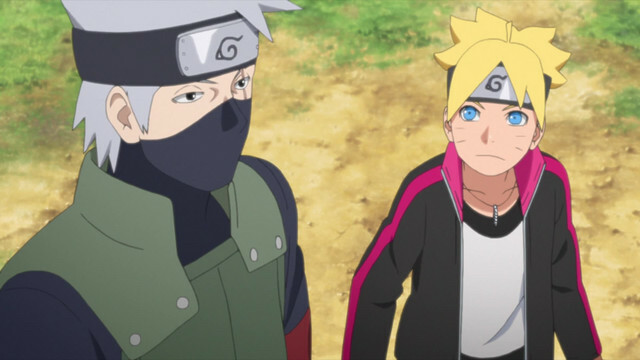 Right from the beginning of Boruto Naruto Next Generations, we knew that Boruto Uzumaki was very different from that of his father Naruto. Yes, the two look similar and there are some similarities in their Jutsu’s however, there are many differences as well. As a result, the origins of their powers and how they gain those powers are quite different. Now, in the latest episode of Boruto, Naruto’s old teacher in Hatake Kakashi, has revealed where Boruto gets his abilities from.

For Naruto, he has no natural talent at all and severely lacked intelligence as well. If you were to look at the class of Naruto’s generation in the academy, the title of Hokage would be very far away from Naruto’s grasp. However, Naruto’s ability to always stay positive, see the bright side in every situation and determination, allowed him to reach the top. Don’t get me wrong, Kurama being sealed within him did help but it took a lot for Naruto to use Kurama’s chakra to his advantage.

Kurama was eager to escape and kill Naruto as a result. Anytime Naruto accessed Kurama’s power it allowed Kurama to get one step closer to escaping. Then there’s the fact that 99% of the village hated Naruto and that could have easily broken his spirit but it didn’t In addition, his lack of intelligence and ability to use Jutsu’s meant that Naruto took longer to learn techniques than most. Well, that was until Naruto was able to use his Shadow Clones but still, Naruto has to work ridiculously hard to get to that point.

Now, as for Boruto, he seems to have a lot of natural ability and a loving family. Furthermore, he is the son of a hero and loved by his village. Then we need to consider that Boruto’s work is peaceful, with more resources and technology as a result. However, Boruto is also highly determined and just as loyal to his friends. The two have similar personalities but the way they access power and develop their skills couldn’t be any more different.

Yet, in saying that, the two share a link and that’s through their blood. Naruto may have not been a genius like many other ninjas who achieved legendary status. However, his father in the Fourth Hokage, was a genius and according to Kakashi, it’s Boruto’s link to Minato that has allowed him o have many natural abilities. Although, Boruto‘s determination, personality and unpredictability is derived from his father. It seems as if Boruto has inherited his skills from both his father and grandfather Hokage’s, which was assumed but now confirmed through Kakashi.