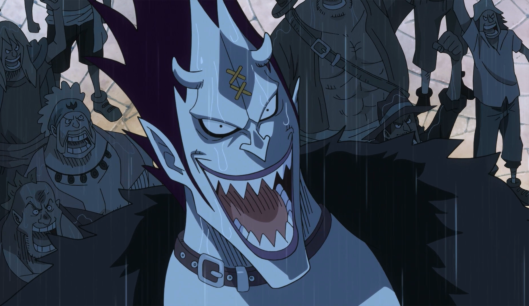 Gecko Moria is a former Warlord of the Sea and a Pirate strong enough to go up against a Yonko like Kaido, in what was known as an epic battle. After that fight, which Moria lost, he was recruited by the World Government as a Warlord of the Sea. However, for reasons we still don’t really know, he was betrayed by them and his whereabouts are mysterious.

It’s believed that Moria’s betrayal was due to his humiliating defeat to the Straw Hats but there are some that believe that it was due to Moria’s dangerous ability. Moria’s Devil Fruit allows him to resurrect the dead. Well, resurrect the bodies of powerful dead people using shadows of the living. .

The Zombies then have the power of the dead peoples bodies, as well as the personality and skills of the people the shadows are taken from. This makes for a dangerous mix. Moria’s abilities has allowed him to numerous notorious Pirates, Giants and Samurai from past eras. This is why the Marine’s fear him, as there are four characters that Moria could resurrect, which will make him even more formidable than what he already is.

Portgas D. Ace is the biological son of the late Pirate King in Gol D. Roger, as well as the adopted brother of Sabo and Monkey D. Luffy. Ace was a powerful pirate captain and vice captain of Whitebeard in life. Ace’s Devil Fruit abilities and Haki usage will make him a powerful ally for Moria. However, Ace’s resurrection will make for a better story than just a powerful soldier. Imagine Luffy and Sabo being reunited with Ace but now, he’s an enemy.