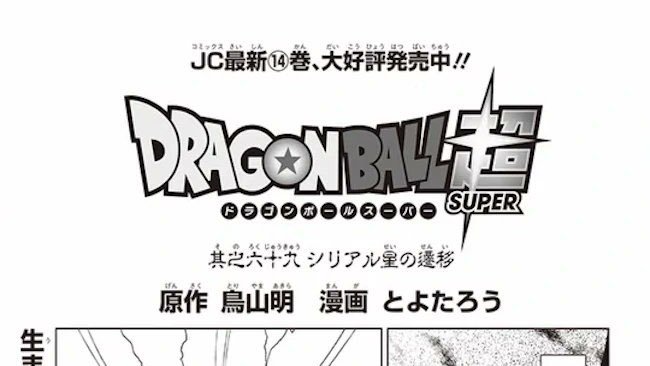 Early drafts for the upcoming Dragon Ball Super manga chapter 69 have been circulating on Twitter over the past few hours, as well as the leaked front cover of the chapter. The front cover was released by Dragon Ball’s official Twitter profile but the other leaked scans are still yet to be confirmed as official.

However, the sources have rarely made a mistake in the past. According to the leaked manga pages for Dragon Ball Super manga chapter 69, we will see more of Granola and his upcoming plans against Frieza, as well as the Saiyans.

Furthermore, there will be more flash-backs of Bardock and his Great Ape transformation, which haunts Granola’s dreams. We haven’t seen translations yet for the leaked manga, as the scans were literally just leaked so, we don’t know what is said yet.

However, we can clearly see the Berus is showing Vegeta something and is even frustrated. It appears as if he might be explaining a technique to Vegeta but again, that’s yet to be confirmed.

In the previous Dragon Ball Super manga chapter, Beerus did hint that Vegeta could learn a power that was more catered to him, as well as God of Destruction’s, as a way to catch up to Goku again. I’m sure all Vegeta fans are hopeful that this could be a glimpse of whatever that power is.

Dragon Ball Super manga chapter 69 is set to be officially released on the 19th of February. Meanwhile, translated manga slides will too be released for the upcoming chapter by us in the coming days.